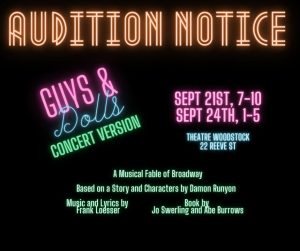 A Musical Fable of Broadway

Based on a Story and Characters by Damon Runyon,

Drop in or pre-book your audition time here: https://calendly.com/theatrewoodstock/guys-dolls-concert-version-auditions?month=2022-09

Please prepare a song from a broadway show no more than 2 minutes long that showcases your talent. If you’d like, you can prepare two contrasting 1 minute selections.

An accompanist or portable speaker with an AUX cord will be provided. All ages welcome.

Guys & Dolls is an oddball romantic comedy musical. Gambler Nathan Detroit tries to find the cash to set up the biggest craps game in town; meanwhile, his girlfriend Adelaide, laments that they’ve been engaged for fourteen years. Guys and Dolls takes us from the heart of Times Square to the cafes of Havana, Cuba, but eventually, everyone ends up right where they belong.

Music of the Night